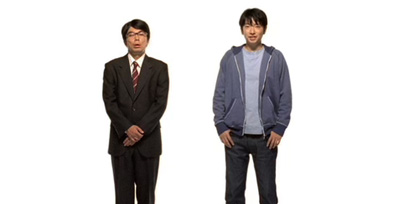 Just as Apple is discontinuing the infamous cool Mac-guy versus unhip PC-guy, they are now using this same advertising slant in its Japanese marketing campaigns. The Japanese Apple videos are nearly identical, with the absence of Justin Long and John Hodgman.

I wish Apple would have quit while they were ahead with the success of this ad campaign. Over a dozen of these does seem to be a bit overbearing. People can quickly relate to the PC guy. “Hey, that guy cut me in line at Starbucks!” “Oh, its ok. He has a Mac.” I can’t say blame folks who feel this way as the repercussions of this brand-building exercise is being felt here.

In class, the folks who have a Macs get labeled as “those mac people”, as if we’re different via our purchase intentions. I bought an Apple machine because of the software integration, the Pro Apps (especially Logic for composing film scores), and the usability of the interface. I didn’t buy a mac to justify a stylish haircut and give myself an excuse to listen to b-rate emo music. 😛

Some of the most creative people I know push these machines to their limits in such creative ways; photographers, composers, musicians. That’s what attracts me.

So in thinking about this move in Japan, I’m curious to see how the Japanese public relates. We’ve learned much about marketing differences between cultures (KFC being marketed as “aristocratic” in the 80s quickly comes to mind). From what I’ve seen, much like Western audiences, the Japanese are attracted to what perceived as hip and cool. From this side of the water though, it is really difficult to tell.

For those with access over there, what have you been seeing with the Apple ads in Japan? Is the US market reaction a precursor to Japanese reaction as well?