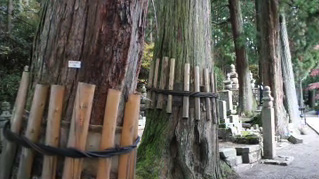 From Wednesday, November 16th, 2005: This is day 5 of my November trip to Japan. This morning, we were awoken by a ringing of a bell at 5:30am. We shuffled off to the services area and sat quietly while the monks performed their morning prayers. It was cold, peaceful, and humbling.

The remainder of the day was spent walking through the stone paths of Koyasan and checking out the old buildings. We ended the day by traveling back to Osaka, which I will post pictures of later.

I just watched an amazing documentary series on the BBC recommended to me by a friend called, “The Root of All Evil“. I highly recommend it. One of the most telling quotes from the movie was one originally from Steven Weinberg, the novel prize winning physicist.

I think this will be one that I WILL memorize. There is also another great quote in that series:

For humanities sake, I hope the latter quote is not true. 😉 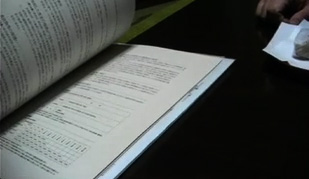 From Tuesday, November 15th, 2005: The Ryokan room, and the Yukatta Battle between Fred and Chris. Do not miss this episode. I had to break the arrival at Shojoshin-in into a separate video feed. We basically got into the room and spent the whole day just chilling out. We were both pretty beat after the day of traveling and battling Kung-fu style!

I’m looking into various ways to support myself while I am in school. One of the possibilities is looking at selling photography online at stock photography sites. In reading the photographer FAQ at iStockphoto.com, I learned something strange today regarding photographing trademarked buildings:

“… photographs of the Eiffel Tower during the day are legal for resale, but not night shots (showing the light show)”

I was never really one to follow politics closely, nor was I ever one to really care about anything outside of music, finding a girlfriend, hanging out with friends, or thinking about what I might want to do the following day, week, month, or year. Usually it involved slogging through life keeping myself happy. Recently, however, this has changed drastically.