Just a brief update before Fuji-san. We’re heading out today but I wanted to get a quick response to the last episode out, talk briefly about Disneyland, and just say hi.

Having lots of fun here in Tokyo and surrounding areas. For Fuji-san, we will be taking some audio at each stop so you all can get the heavy breathing experience as we attempt to climb to the top. 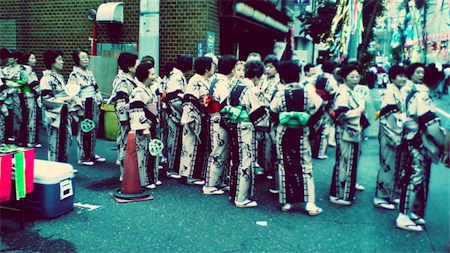 Having fun without a bike, find out why in today’s episode. Also, I talk a little bit about Tanabata and share some audio from the Tanabata parade in Asakusa from about 3 weeks ago. Lots has been going on but we’ll keep the episodes coming out. Enjoy.

Seems like I’ve been dodging these things in my sleep since I’ve been here. This past weekend we have had both a typhoon and an 6.6-6.8 earthquake in Japan. The earthquake occurred in Kashiwazaki approximately 160 miles northwest of Tokyo. Though I was awakened this morning by my bed moving softly side to side, I didn’t occur to me until Alex and I were at the Panasonic center watching the damage from the Northwest side of Japan that it was actually so large.

Even further, the water level was significantly higher and much more “muddy” in the rivers. Alex and I initially thought that it was due to the typhoon but I have just learned that the earthquake also caused some minor tsunamis warnings that had suspended bullet train service, and temporarily shut down the worlds largest nuclear reactor earlier in the day today.

My experiences with earthquakes so far has been fairly mild. I think its primarily because Tokyo doesn’t get hit directly with so many earthquakes. But I think its interesting that I usually sleep through them or get woken up gently by them. My personal experiences with earthquakes and what I see on the TV is so highly mismatched at this point. Very strange. At any rate, I am ok and there were only a few deaths from this past set of natural occurings.

Its coffee time again. Join me for round two of my discussion with Fred on the finer points of Japanese coffee. If you’re not sick of hearing the word “coffee” yet, you will be after this episode. Grab a cup and enjoy!

This was recorded a while ago so my outro comments may seem out of context. Hope you like it anyway. Cheers!

Ok ok, now you all know what I’ve been up to when I’m not podcasting. I’m sorry for the farce.