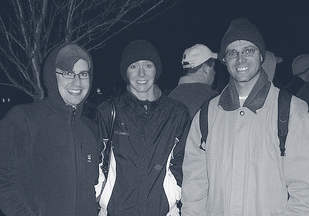 When Nintendo announced their strategy to release the Nintendo Revolution (a.k.a. Wii) as a platform that would focus on unique gameplay instead of next-generation graphics and sound, I knew it would be the console for me, casual gamer with a Nintendo-upbringing. What I didn’t know is that it would truly be the console for everybody, or at least apparently.

This past Sunday was spent stalking Target from the wii-hour of 5:00am only to find out they had 12. I think we were about #60ish in line. Oh well. Another wii-less week. Though this week has been pretty busy and tiring so I don’t think I would have had much time to play it – it is still becomine a quiet obsession of mine.

All in all, it was fun hanging out with Don and Linda outside, watching crazy people run around in nothing more than pajamas and a towel or wrapped up in sleeping bags that were made in the 70s.