As if actually being in Japan weren’t enough, today I ventured into Second Life today to see what I could find that was Japan related and perhaps find a venue for some more in-depth language practice. This was also to do some research for an upcoming video episode that I wanted to do. More on that later… 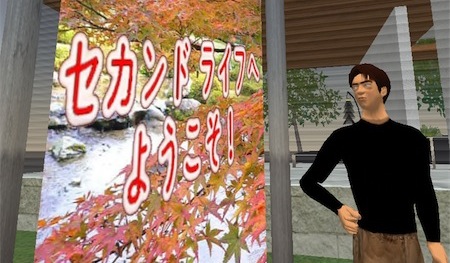 I first found this sign on “Help Island”. Pretty encouraging to see the use of Japanese even in the introduction section. This area is like a sandbox and full of just random things. 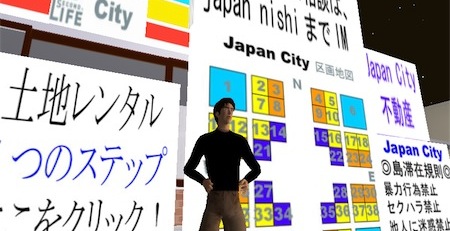 But I was able to find Japan city pretty easily. I only explored one area since the area I wanted to go to was not available at the time. Notice the grid map over my left shoulder which shows all of the land areas for Japan City. This is my “I am the master of Japanese Text” pose. 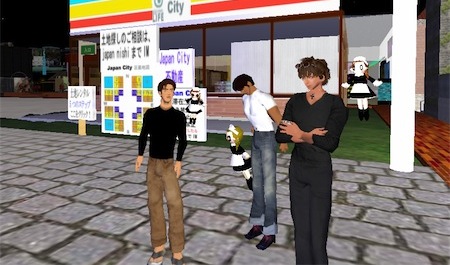 In Japan city, I quickly met some people. The person all the way on the right then proceeded to give me some items that I was able to keep – including a maid-cafe thing that follows you around. When you double-click on it, it brings you to a maid-cafe. I could have sworn I saw this guy at Tokyo Game Show. Something fishy here. 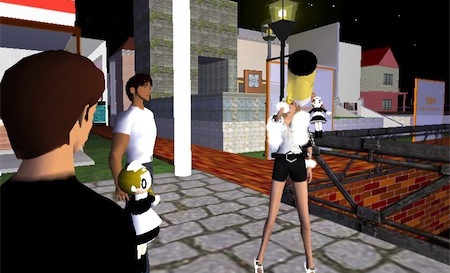 Ahh, but certainly like real life. It all goes downhill real quick. This Mr. Slick turned into Ms. Lush and proceeded to drink large beers and stumble around wildly. Though it sounds immature, all interactions were in Japanese so it did have at least some education aspect for me.

Overall, I think Second Life has some potential for learning another language. Japanese support within the program is great and definitely has some advantage to your helping your reading skills. Also, since the last time I have checked out Second Life, there is also voicechat, which makes conversing with people in their language that much easier.

I want to explore some more as I get some free time, but at least for now I’ve gotten myself situated and can find some other areas to practice Japanese in. Now, if I can only find that maid cafe in Akiba… (^_-)/