Well not really, but this will probably be as close as I get. I went to an arcade in Asakusa last night. If you pay just a little more to start up Sega’s Initial D 4, you get to save your player data on an IC card (a.k.a. Smart Card) that the machine will create for you on the spot. Now I can upgrade my car and keep track of the levels I’ve completed, and track my progress on the Internet. I’m a nerd, but this is so very cool.

There are a slew of games like these that make interesting uses of IC cards. One game, called Sangokushi, uses IC cards by allowing the player to manipulate the position of the cards to control his or her troops on the screen. Another game, Gundam Card Builder 0083, uses the same approach. It looks awfully complicated but I do want to learn at some point. I may have to take up smoking to stay in these places for more than 15 minutes though as there are a ton of chain-smoking 25-45 year olds there.

If you want to see more pictures of what I’m talking about, click on this Flickr search. Enjoy!

Take a stroll with me as I take a walk through a park near where I live and talk a bit about lessons in humility. I have a random conversation with a stranger and share some sounds of Tokyo as I walk home. A short episode coming in at 20 mins and little more personal than the rest before. Highly edited due to wind noise however so please bear with me. Hope you enjoy! Mata! 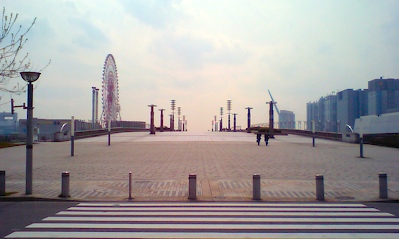 The Dream Bridge in Ariake 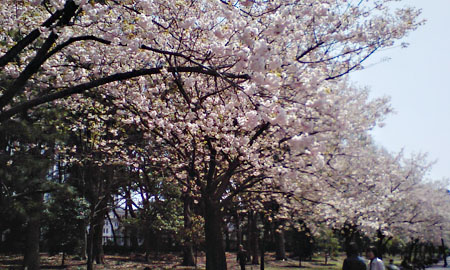 It has been nearly 20 days in Japan and I’m finally, finally feeling settled in. Today I took care of another major hurdle in the chain of bureaucratic events that must occur if you are moving to Japan – the dreaded, yet much needed bank account.

On my way over to Ginza, to find one of the very few Citibank banks in the city, I met up with Scott Lockman from Tokyo Calling. If you are interested in Japan and haven’t visited his blog or podcast, please do. Scott is a great guy and every bit as articulate as I thought he might be after listening to his podcasts. We did a short interview with two mics and I captured some audio from my limited setup as well. We chatted about what its like to be in Japan, the future of podcasting, the point of Twitter, and the dangers of giving too much information out in your podcast. Look for some of that in a future episode. 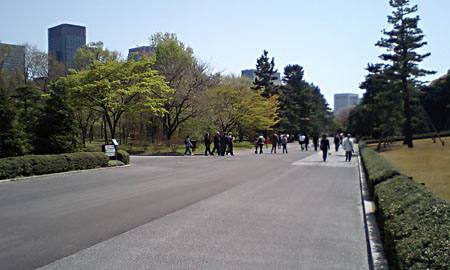 After a nice chat and some coffee, I headed over to Ginza, walking through the emperor’s palace a different way this time. I stopped to take a few photos with my new phone and played with my GPS and moving map functions while I sat under the sakura trees. I really had no particular time I needed to be at the bank so I took my time heading on over there.

Working with Citibank in Japan was a breeze. They spoke English very well, and when they found out I spoke a little Japanese, they were delighted and began telling me about all the places I needed to go – Sumo wrestling in Sumida-ku (where I live), Kamakura, and more. Just more to add to the list. I am going to create a big list and hopefully I can visit these places on the weekend. The account took very little time to set up once I had my alien card. However, depositing what remaining cash I had took nearly a 1/2 hour at the teller.

It’s so bizarre, some things are so convenient in Japan while others take a very long time and are very procedural. I waited the typical 10 minutes for a free teller, I brought my slip and money up. She took and and told me to take a seat. Fifteen minutes later I returned for my receipt. I’m still trying to figure out why I takes 15 minutes to count money and deposit it. I guess perhaps, they want to be sure it was put in the safe or something. I’ll never know because I don’t think the cop sitting there would have let me see what was going on behind the scenes.

I then took my time home and did my monthly ritual of going through my finances. Banking online makes living a dual life in American and Japan very convenient. In that regard, thank you Citibank. I have some free time tonight so I am off to study a little more grammar. I will post another episode soon this week, please continue to leave comments and suggestions as always. Take care.

Special guests, raw chicken, bicycle skills and more. Get it all in this episode. Tonight Alex (my trackmate, roommate, and friend) takes a seat at the mic with me for a dualing discussion on the finer points of Japan. As we dry off from the monsoon that seemed to appear from out of nowhere earlier today. Today’s episode comes in around 30 minutes long and I even cut out the part about commuting around the city to post on another rainy day. Enjoy! 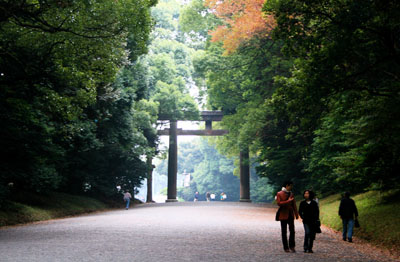 I’m constantly posting from the past it seems. This weekend was busy with hanami activities (and subsequent recovery). I will be posting some video and audio from that as well. However, as promised, here is the Meiji-jingu video from last week.

I shot most of this footage from that day. Meiji-jingu is my favorite place to visit when I need some peace and quiet. Right in the heart of Yoyogi park, it never ceases to have a calming and quieting effect on me. Enjoy!